skip to main | skip to sidebar

leading from
Zeitgeist in Cinema


a) A slightly amusing piece of news recently in the Daily Mail about how ancient small scarab pendant found looked like a Star Wars Millennium Falcon, (See: Ancient Egyptian scarab seal is found on extinct volcano in Israel: 3,500-year-old carving represents Pharaoh Thutmose III (and it resembles the Millennium Falcon) However it forced me to cast my mind back in time and take note of what this space ship design was all about.

b) However the other side to that is that once Lucas seemed to have come up with a hamburger with an olive idea for the space ship and a bite taken out of the front as a beginning point, it's likely that an Egyptian pendant perhaps a falcon pendant or this famous particular scarab pectoral with "desert glass" scarab belonging to Tutenkhamun would have served as inspiration for developing the final ship with all the details of its outer structure.

c)  Tutankhamun's Falcon Earrings
Another component from the Tutenkhamun jewelry to observe are the gold Falcon ear rings which were displayed in 1976 as part of the same collection.  Perhaps compare the circle on top of the spacecraft where the gun is found with the along with the long rectangle leading up to the front of the ship, to the bird with its ring display if wings and its long tail, and the head becomes the upper laser cannon 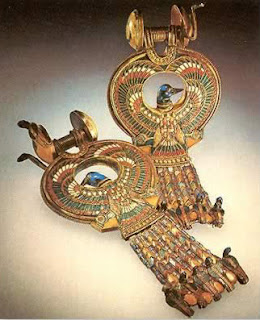 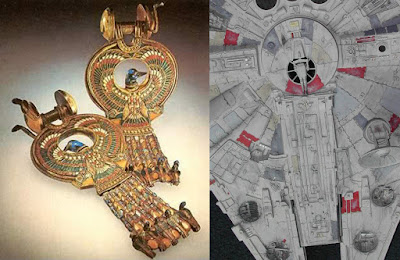 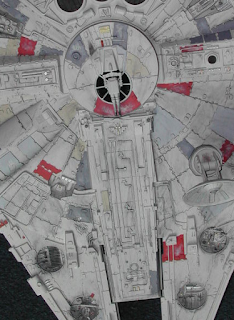 d) The name Millennium Falcon entered the revised fourth draft of the script for Star Wars, dated March 1976. What is interesting about the name is the fact that the Ancient Egyptians had this idea of the "boat of a thousand years" (sometimes the number could be a million years, but would also represent an uncalculable span of time) which carried the falcon headed god Ra, and then Millennium means a thousand. This pendant also inspired the likes of HR Giger around that general time with works such as Necronom II.


e) The piece of jewelry also appears to have partially inspired a painting of a demonic face by HR Giger called Necronom II in 1976 , a painting that would inspire the face of the monster in the 1979 movie Alien.
( See; Necronom II: Inspired by Egyptian winged scarab and Paintings that inspired the design of the Alien  at the Alienexplorations blog)

f) 1976 was the year that the The Treasures of Tutankhamun exhibition started off in America at the National Gallery of Art and this would have lead to magazine articles across the world since it was all about what was happening in America and an exhibition catalogue that year. And so this would have led the Millennium Falcon Designer and Giger finding decent images of the scarab pectoral presented before their eyes.
Posted by wmmvrrvrrmm at 07:43